Reagan is our Program Director. He is majoring in Journalism and is a member of the Sports Department. He has broadcasted live from U.S. Bank Stadium. You can hear him live on Wednesday's from 6-8 p.m., and Thursday's from 6-8 p.m. 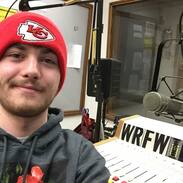 Owen is our Sports Director. He is a journalism major and does play-by-play for football, hockey, and basketball. He has broadcasted live from U.S. Bank Stadium. You can hear him live on Monday's from 7-8 p.m., Wednesday's from 6-8 p.m., and Friday's from 6-8 p.m.

Rick is a card carrying member of the Screen Actors Guild and the American Federation of Radio and Television Artists (SAG-AFTRA). He teaches audio and video storytelling at UWRF and since 1998, he’s enjoyed being associated with that roller coaster ride we fondly call, “Pure Radio 88.7.”

Sandy teaches broadcast news writing and reporting and provides guidance to WRFW’s news and public affairs staff. She has worked as a radio news director and reporter, TV reporter/photographer and a newspaper reporter/photographer. Sandy also spent 3 years as a TV “weather girl” in the days when that was a common term for weather reporters who were women. She still wonders why the men weren’t called “weather boys.”

"I fix what they break.”